In this post we’ll look at another crackme, Bakunawa! 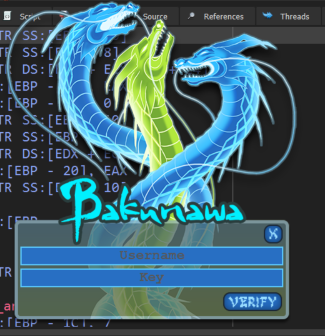 This one was listed as level 5 (Very Hard) and certainly was not without its difficulties!

Featuring a sort-of virtual machine executing real x86 instructions encoded into an odd binary file as a point of obsfucation, this took me quite a long time to figure out. I built some tools in the process and finally a Keygen program once the algorithm was identified and reversed.

Major spoilers follow, here’s the link if you want to have a go yourself!

PE Studio identfiies the executable as a normal, non-packed Windows program. Poking around a bit we can see it was compiled with C++ 8 and uses some abnormal libraries such as DirectSound and Winmm.

Looking at the resources (consuming 57% of the executable size) we can see a bunch of images, that appear to be music files, and a rather large binary file called “naga”. We’ll dump this binary to file now since it looks like it will be important. 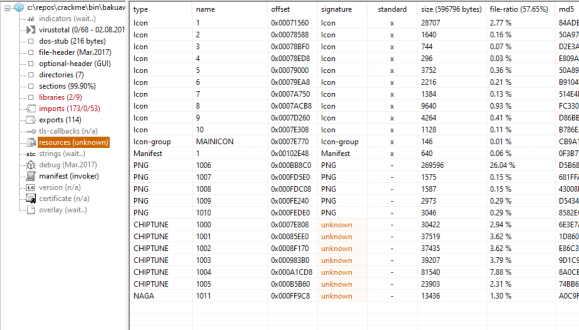 Moving onto imports / exports it seems to have statically linked the MilkMod library so it seems we can indeed expect some music.

Having a quick look over the strings reveals some fun looking bits, almost like a choose-your-own-adventure! 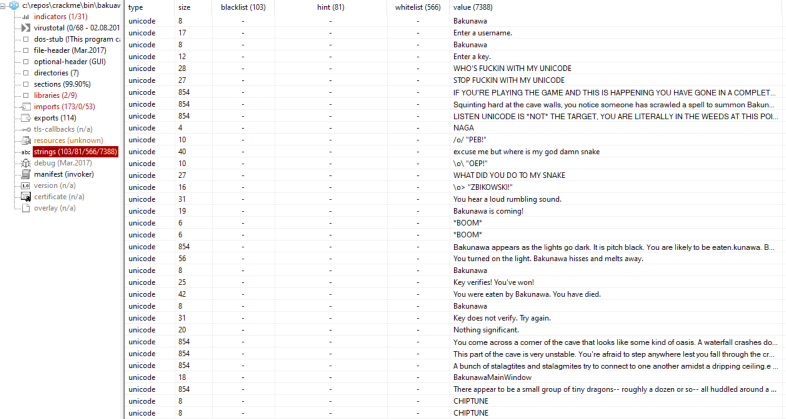 Running the executable we are presented with a very cool key entry screen accompanied by some great chiptune music.

If you run it with the debugger attached, however, you do not get the screen and instead it plays a chiptune version of The Birdie Song, which is hilairious. Only a RickRoll would have been better!

A quick brekapoint on IsDebuggerPresent leads to a simple check which when bypassed, enters a Windows event loop and launches the UI as normal.

Next up is to find where it is reading the username and password. I’m expecting it’s going to load the mysterious Naga resource at some point as well, so perhaps a good starting place is to put breakpoints on the Windows LoadResource function and see what comes up. 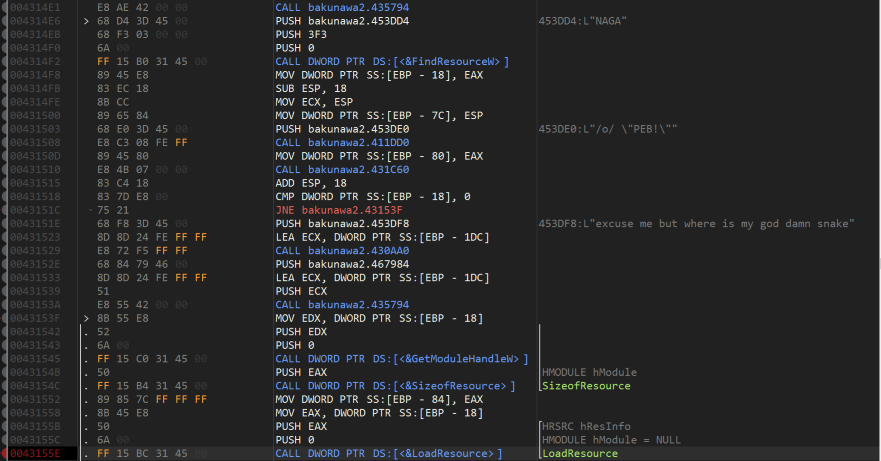 As expected, after a name and password is set and the Verify button is pressed, it attempts to load the resource “Naga” as seen above.

That’s not much fun, let’s try and work out how the serial check works and build a keygen for it.

There’s quite a lot of stuff happening in this main function. After quite some analysis, two procedures stand out in particular. The first is a function that loads the Naga resource, and has a ton of code that parses the data into structures / classes. We’ll come back to that..

The second is where the magic happens.

After a bunch of stuff, several calls to VirtualAlloc happen. The first is a large section of read/write memory. After it has been allocated, a pointer is stored to the bottom of the memory. Shortly it will transpire that this area of memory is to be used as the CPU stack. The program will copy a pointer to the username and password that was entered into the bottom of this stack area.

A little further on we see more calls to VirtualAlloc, which have execute permissions. If we poke around in this code for a bit we will see that this area of memory has x86 code copied in to it, presumably from the structures read in from the Naga file. However, it only ever executes small pieces of code at any one time. A clever bit of design here essentially backs up all the CPU registers and moves the CPU stack pointer to the virtual stack location, restoring them at the end of the snippet. In this way it behaves much like a thread does.

However, because it only executes small bits of code at a time, it is very hard to see what it is actually doing. We can however wait for it to finish processing instructions and have a look at the resulting stack area to reveal some interesting infromation 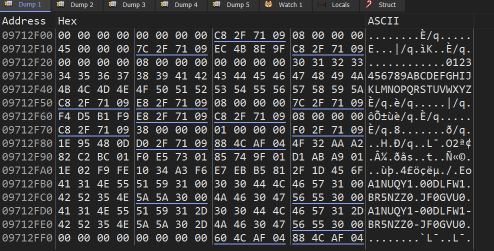 here we can see it has created some kind of alphabet to use in its keygen, and we can see what looks to be a generated serial in the lower part of the memory. Let’s try this serial in the program and see what happens: 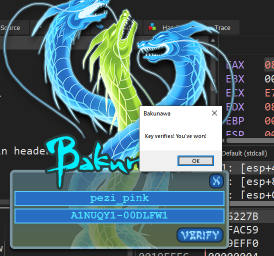 As suspected, it is indeed the serial (though it needed the - character added). Perhaps we won’t need to understand the entire virtual program if we can work out what it’s doing in this last part.

Since we know the area of memory that the serial is written to (as an offset from the virtual stack) then during debugging, after we know the stack location, we can setup a hardware breakpoint to trigger when that location is written to. Doing this and having it trigger a few times leads to this tasty looking morsel. 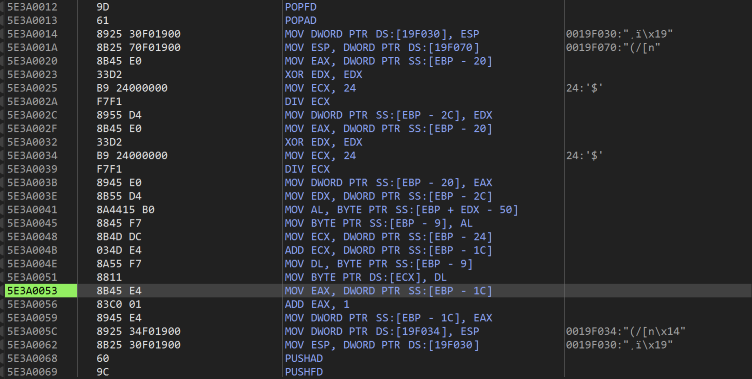 It looks like we have struck gold here. Analysing this code shows that is divides some value and uses the remainder to index into the alphabet that is used to write the next serial value. Unfortunately, this is only one iteration of the loop, and after a few iterations the mysterious number changes completely. We are not going to be able to write a keygen without knowing where those numbers are coming from.

How to Train Your Dragon

We need to be able to see the entire virtual program. To do so means we are going to have to reverse engineer and understand this mysterious binary file format that holds the machine code in it. Having observed the virtual machine’s behaviour, it is also apparent it knows where Call instructions are and some other bits and bobs. Time to roll up the sleeves and get reversing…

The header has a magic number and some other useless bits, the only relevant parts are the starting instruction id and the total instruction count.

There’s a bunch of other code that creates linked lists of all the nodes and strings it all together. There are four such lists in the core of the program that the machine uses; I don’t know exactly how since it’s far too much to look at it all, but I think this is enough warm up F# and have a go at parsing the data.

Performing some analysis on the parsed data reveals some useful information

To produce the working program we’ll have to decide on a memory layout for it. Some of the Call instructions have large relative offsets which would not work with an entry point at location 0x0, so we’ll need to re-write their relative offsets with a location we decide on. We could do the same with the jumps, but it’s best to keep them with their currently encoded targets if possible. That means we will need to parse and understand their relative offset addresses in order to write the target code at the correct place in memory.

First then is to decide where each subroutine will sit in the memory space. To do this we’ll need to know the size of each. To calculate the size, we’ll need to recusrively follow the next pointers, storing any jump targets along the way. Once we are out of instructions, recursively repeat the process on the collected jump targets. It is possible for more than one jump to target the same instruction so we’ll need to make sure they are only visited once.

With the lengths calculated, we can assign them starting memory locations, with a little bit of blank space between each.

This creates a map indexed by the starting instruction id that we can use when assembling.

Have to be careful with this stuff, it’s easy to get tripped up with signed and unsigned data. It is important in the preceeding code that the result is treated as signed, since we’ll be using it to re-calcuate addresses and we need negative numbers to work properly.

Finally we are left with the task of writing the assembler itself, which will

Here’s the fist version I got working, a lovely mix of mutable and immutable code that I’m sure purists everywhere will approve of

Now we can write out the array as a binary file and we should have the fully re-constructed virtual program that we can disassemble and reverse engineer.

IDA Pro sucessfully disassembles the program ready for static analysis. It’s about 500 lines or so of assembler code.

Here we can see some of functions after they have been analysed and renamed. You can see I found strlen and memset equivalents, along with a few functions xor1 and xor2 that are called in various ways before core_keygen does the work of actually producing the serial.

It is way too much to show here of course (please ask if you are interested!) but here’s the piece of code we saw earlier where it was indexing into the alphabet, with some of its surrounding code. 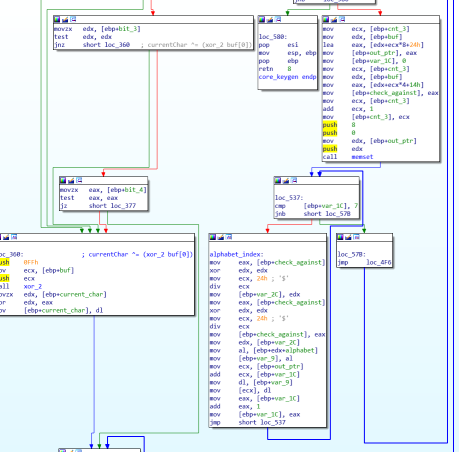 I won’t explain how the algorithm works exactly. Rather I have re-written the core of it, somewhat different since I have no need to programmatically generate the alphabet and such things. It is in C/C++ of course since it far easier to write all this very unsafe pointer stuff and bitwise manipulations.

Once this program has finished, it leaves the calucalted serial in serial[] Bakunawa execpts it to be entered in two parts separated by a - character. Let’s try it! 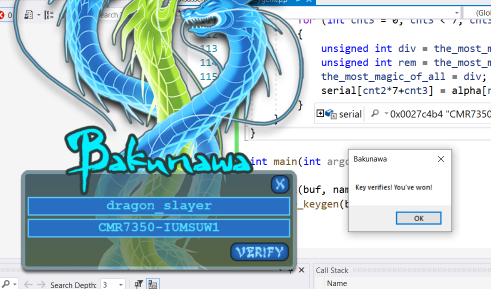 This was a very cool crackme that obviously had a great deal of time spent designing and writing it. It took me a couple of solid days’ work plus a few smaller sessions to finally achieve the end goal of writing and testing it. Most of the time was spent trying to understand the binary format. Thanks to Frank2 for writing it. It also includes several very cool chiptune tracks, though I was quite sick of them in the end and worked out which thread I needed to suspend to stop them from playing all the time!